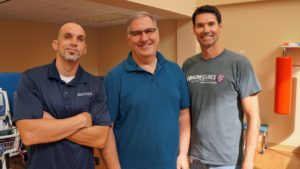 Prior to his first stroke in 2015, Doug Mace, then 48, commuted from his home in Clio to Kirtland College to teach mathematics. Always up for adventure and travel, he took a sabbatical to go overseas and teach at military bases. He and his wife, Eadie, had just arrived in Germany and Doug had taught his first class when he suffered a stroke – something quite unexpected that rocked the couple.

Doug was hospitalized in Germany and began his rehabilitation there, ultimately spending nearly three months in the country before he was cleared to fly back to the United States.

“When we got home, Doug was doing therapy in Clio but we were having trouble finding the right speech therapist,” Eadie explains. “We were struggling. He wasn’t getting the intensity he needed for his aphasia.”

Around the same time, his physical therapist gave him a pamphlet about the Bioness NESSâ L300ä to improve foot drop, though she had never worked with the technology.

Making the drive from Clio two times a week, Doug worked with HealthSource physical therapists and speech-language pathologists – fueled by his determination to get back to work as a math teacher. “It was the attention to detail,” Doug says, “that’s how I knew this was the place to be.”

According to Eadie, Doug’s vast math knowledge and ability to teach were still there, he just had difficulty tapping into it. “Katie worked one-on-one and pounded it out of him,” she remembers. “He didn’t always appreciate it, but she promised she would get him back to work and she did.”

Doug’s hard work paid off when he successfully passed the test Kirtland required to get his job back. Not long after returning to teaching, Doug flew to a conference in Denver with fellow math teachers to present on his work in Germany. Two weeks later, he had his second stroke. While the first affected his right side, the second affected his left.

After a month at Genesys, Doug came back to HealthSource for outpatient treatment again.

“They weren’t exactly happy to see him because, of course, that’s never their goal,” Eadie laughs. “But they jumped right back in and started all over.”

His physical therapist worked with him to get his strength back and get him walking again. “He pushed him and pushed him,” Eadie remembers.  His speech-language pathologist focused more on memory work this time around.

“It isn’t easy coming to Saginaw twice a week,” Eadie explains, “Especially in the winter. But it’s so worth the drive. He’s not just the 10 o’clock appointment. He’s Doug to them. More than coming in for the drudgery of physical therapy, it’s coming in and – in a sense – he’s with friends. He’s with family who want the best for him.”

Note:  If using for NewsSource, it’s worth noting that Doug took this summer months off to see how he could do on his own. He’s very anxious to get back to assess “how much I’ve lost.” Eadie told me on the sly that he doesn’t do much of anything on his own, so he REALLY needs to get back and knows he does. Brian and Katie are very motivational for him!