A New Year a New Start 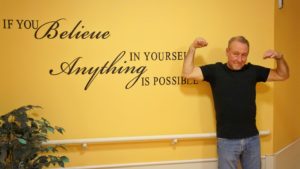 New Year’s 2016 was supposed to be a festive one for Jeff and his wife, Shelly, who live in Shields. They traveled down to Macomb County that year to ring in New Year’s Eve with their son. Instead, Jeff woke up New Year’s Eve morning having a stroke. He was rushed to nearby Henry Ford Hospital, where he stayed a week in intensive care.

To keep the momentum of his recovery going, the Taylors wanted to find Jeff a top-notch place for inpatient rehabilitation. They preferred something closer to home so that Shelly and the Taylor’s dog Chico could provide continuous love and support.

“The whole place is just fantastic,” he says. Jeff stayed one month in the Beaches neighborhood for acute inpatient rehabilitation, receiving physical therapy, occupational therapy, and speech & language pathology. He progressed to outpatient therapy three times a week, and continues working out now in the HealthSource therapy gym several times a week.

“They unloaded me from the car when I arrived at HealthSource from Henry Ford and, after just a brief trip to my room, started therapy right away,” Jeff remembers. He appreciated how kind everyone was to him. He was encouraged by everyone’s motivating approach – something he saw at the beginning of his stay, throughout his treatment, and to this day when he comes to the therapy gym. Jeff commends the expertise of his whole team, including aides, nurses, and therapists. “They are all Number One on my list,” he notes.

Jeff loves hunting and working in the yard, something he shared with his therapists. “They knew I was motived to get back to my normal life and routine, so they had me working hard,” he says. “They called me an overachiever. If they asked for five sit-ups, I have them 10.”

Today, Jeff is doing great. His left foot drags a little when he’s tired, but he is quick to show anyone how well his left hand works. “I wouldn’t be like this without HealthSource,” he points out. “Something great happened when they brought me here and I started therapy. It just continued until I walked out, got in my truck and drove away!”